This IS the Star Wars Special You've Been Looking For!

G4TV's Blair Herter and Blair Butler are on a mission to find all the latest information on Star Wars Celebration V, and the hosts will bring fans everything they need to know about exclusive collectibles, new games and a sneak peek at Star Wars: The Clone Wars Season 3. If that isn't enough, G4 will sit down with the Jedi Master himself, George Lucas, as we celebrate the 30th anniversary of The Empire Strikes Back and look at what new adventures may come from a galaxy far, far away.
Don't miss Star Wars Strikes Back, June 17 9PM ET only on G4, right after their E3 '10 live coverage.

Star Wars artists of extraordinary vision will be exhibiting and selling their original prints at Celebration V. Each of the artists listed here will have a limited number of prints available, created exclusively for the show, for sale August 12-15 as part of the Celebration Art Show.

Most of these artists will be within the Celebration V Art Show area, hosted by ACME Archives, in the Celebration Experience Exhibit Hall. A few others will appear in their own booths on the exhibit floor. Here are some of the artists participating. Check back soon for additional artists.


Jerry Vanderstelt has loved Star Wars since first seeing A New Hope back in 1977 in an old drive-in theater that had crumbling paint chips on the corrugated metal screen, with sound coming through crusty old speakers mounted on the family Buick. All the same, the magic was in the powerful story, which has stuck with him to this day. Jerry has been a freelance illustrator for the past thirteen years, creating paperback book cover art for publishers such as Ace, Roc, Simon & Schuster, Pocket Books and many others. Jerry has also created many Star Wars and Indiana Jones artworks for companies such as Hasbro, Topps and Acme Archives. Recently, Jerry has launched his licensed The Lord of the Rings fine art reproductions program, some of which will be on display here at Celebration V. More of Jerry's work can be found at: www.vandersteltstudio.com.

Chris Trevas is celebrating his 15th year as an official Star Wars artist. Over the span of his career he has created Star Wars artwork for several licensees including Random House, DK Publishing, Scholastic, Golden Books, Wizards of the Coast and Topps among others. He has also been a writer and illustrator for Star Wars Insider magazine. Trevas has illustrated three books for the Star Wars Essential Guide series from Del Rey (The New Essential Guide to Alien Species, Jedi vs. Sith: The Essential Guide to the Force, and The Essential Atlas). Trevas and fellow artist Chris Reiff are the illustrators behind Star Wars Blueprints: The Ultimate Collection, Star Wars Blueprints: Rebel Edition and the upcoming Millennium Falcon: 3-D Owner's Guide. See www.christrevas.com.

Illustrating over 130 cards for the Star Wars: Revenge of the Sith card set for TOPPS, Cat joined the Star Wars family in 2004. Her highly collectible sketch cards brought Staggs into the forefront of Star Wars fandom, where she has continued to produce sought-after artwork for multiple sets. She has created exclusive prints for Star Wars Celebrations III, IV, and Europe, and is currently illustrating a new exclusive for Celebration V. She has also illustrated several short fiction works for StarWars.com. Cat is currently designing an exclusive t-shirt for female Star Wars fans for Lucasfilm's recent apparel licensee Her Universe.

David Rabbitte is a professional illustrator who has worked in the animation industry since 1993, serving as a background artist on feature films such as Anastasia, Titan A.E., and Curious George. Currently working as a freelance artist, he is known for his Sci-Fi and fantasy artwork which has been featured on book covers, trading cards and comics. He has worked for clients including Lucasfilm, 20th Century Fox, Universal, Marvel, Byron Press Books, Boom! Studios, Sabertooth Games, Decipher, Topps and Upper Deck Trading Cards. Recent projects include a base card and 100 sketch cards for the Star Wars Galaxy 5 trading card set, sketch cards for Topps' The Empire Strikes Back 3D Widevision card set, and cover art for Boom! Studios Muppet Peter Pan hardcover book.

Working as a professional illustrator since 1989, Mark left his paintbrushes behind in 1995 to pursue music and other opportunities. In 2005, he reintroduced himself to illustration by taking on numerous sketch card sets including properties held by Marvel, DC Comics and Lucasfilm. Watercolor, pencil, pen & ink are all mediums Mark loves to work in. Having attended Celebration Japan, this is Mark's second time participating in a Star Wars-themed art show.

Kevin is a self-taught artist from Rhode Island who currently resides in Pennsylvania. He has been a huge Star Wars fan all his life and has always dreamed of being an official Star Wars artist. Now that he is, Kevin strives to help others with his talent by donating a lot of his time and artwork to charities such as Make-A-Wish, American Heart Association and many others. Kevin has done artwork for Topps Star Wars Galaxy 4 & 5, Star Wars: The Empire Strikes Back 3-D, Star Wars: The Clone Wars, Star Wars: The Clone Wars Widevision, Star Wars 30th Anniversary, and over 40 other sketch card sets. Kevin has an officially licensed line of Star Wars clothing available at Zazzle.com. He is delighted to be an honorary member of the 501st. His work can be seen at www.kevingrahamart.com.

Grant Gould is a freelance artist currently based in Minnesota. Since 2005, he's worked on numerous Star Wars projects, including the Klutz kids' book Draw Star Wars: The Clone Wars, The Clone Wars web comics, Topps trading card sets, an exclusive Yoda cover for Non-Sport Update magazine, and a variety of features for StarWars.com. Grant also had the honor of illustrating the official Star Wars Celebration V badges. Beyond the world of Lucasfilm, Grant has worked for a wide range of clients, including Target, Macy's, Universal, ABC, Image comics, IDW, Upper Deck, Pro Wrestling Torch, Green Ronin, and many more. He also has a few creator-owned projects, including 2008's The Wolves of Odin (wolvesofodin.com). Find more info on Grant at his website: grantgould.com.

Shortly after graduating with a BFA from the University of West Georgia, Ben Curtis Jones became an official Lucasfilm artist when he was asked to participate in the Indiana Jones Heritage Collection; a trading card set produced by the Topps Company. Ben completed 100 cards for the set and immediately created a clientele for his work. Since the set, Ben has created licensed art for numerous Star Wars and Indiana Jones properties. Known widely for his cinematic illustrations, Ben's masterful renderings have captured the hearts of subjects throughout science fiction. Ben's work can be seen on trading cards, posters, covers, ad designs, and more. As a lifelong Star Wars fan, Ben is honored to be a part of Celebration V, where he can express his respect for the story that influenced his life so many years ago. To view Ben's entire portfolio, visit his official site at www.bencurtisjones.com.

Since first appearing in Topps' Star Wars 30th Anniversary series, Doug Cowan's Star Wars artwork credits include Star Wars Insider, "New Visions" for both Topps' Galaxy IV and Galaxy V, as well as Topps' The Clone Wars and The Empire Strikes Back Widevision card sets. A graduate of Pratt Institute, he has also done work for Indiana Jones, and The Lord of the Rings. His work has been shown at the Salmagundi Club in NY and The Society of Illustrators. Cowan cites Joe Johnston, Ralph McQuarrie and Nilo Rodis-Jamero's work in The Art of Return of the Jedi as a substantial influence.

Katie Cook is a comic book artist and illustrator living in Ann Arbor, MI. She is full of nerdy wonder and excitement for her first Celebration after a long history in the Star Wars universe (both as a fan and as a professional). Some of Katie's credits besides Star Wars include licensed work for DC Comics, Marvel Comics, Jim Henson, The Lord of the Rings and more. You can see more about Katie, her art, and her cats at www.katiecandraw.com.

Kyle Babbitt is an artist living in the San Francisco Bay Area. Since Kyle was young he has had a love for art and Star Wars, never thinking that one day the two worlds would come together professionally. Since Kyle began work as a professional illustrator he has worked with such major Lucasfilm properties as Star Wars and Indiana Jones. Kyle is best known for his work as a sketch card artist. Some of the sets Kyle has worked on include: Star Wars: The Clone Wars, Star Wars Galaxy 5 and Indiana Jones Heritage. Kyle is looking forward to his first convention appearance at Celebration V. Kyle's work can be seen at www.kylebabbitt.com. 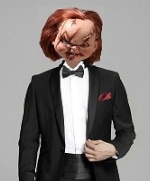