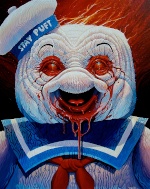 petit mail du FACTS
Less than twenty days to go, so time for an update on the 2009 edition of F.A.C.T.S.

First of all, we've got a new batch of guests to announce:

* KEVIN SORBO, who played the main character in the TV series Hercules (Hercules himself!) and Andromeda (Captain Dylan Hunt), but who is also known for his roles in Meet The Spartans, The O.C., Xena: Warrior Princes, and many more;
* JIMMY JEAN-LOUIS, a.k.a. "the Haitian" from Heroes;
* ROBERT PICARDO, known from his roles in Stargate, Stargate Atlantis, Star Trek: Voyager, Smallville, The Wonder Years, and many more;
* GLENN FABRY, a famous British comics artist who worked on Slaine, Preacher, Hellblazer, etc.;
* ROMANO, a Dutch artist whose works include Lady Death, X-Men, The Darkness, Bloodrayne and Storm;
* and some more artists.

Sadly enough, LOU FERRIGNO had to cancel his appearance due to a movie shoot that could not be rescheduled. We look forward to welcoming him on a future edition of our show.

If you're looking for stuff to buy, you will have a field day at FACTS. There will be more tables than ever before – totaling more than 1 kilometer in length! DVD's, CD's, toys, books, comics, anime, model kits, etc. – you'll find it all and much, much more!