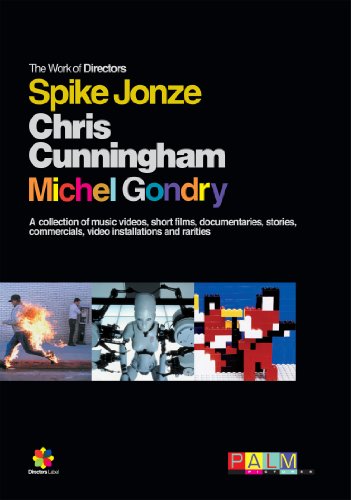 
Amazon.com
The Work of Director Spike Jonze
When you experience The Work of Director Spike Jonze, you enter a world where anything can happen and frequently does. From the innovative director of Being John Malkovich and Adaptation., this superior compilation of music videos, documentaries, interviews, and early rarities offers abundant proof that Jonze is the real deal--a filmmaker ablaze with fresh ideas and fresh ways of filming them. While collectors will regret that only 16 of Jonze's 40+ music videos are included here, this glorious sampling represents the cream of Jonze's bumper crop, and for sheer ingenuity, it doesn't get any better than this. From the Beastie Boys' popular TV cop-spoof "Sabotage" to the intensely disciplined backwards-filming technique of the Pharcyde's "Drop," it's clear that Jonze has an affinity for inventive street theater, culminating in the sad/happy vibe of Fatli! p's introspective "What's Up Fatlip?" and the pop-jazz effervescence of Bjork's "It's Oh So Quiet." Technical wizardry is also a Jonze trademark, especially in the elaborate "Happy Days" nostalgia of Weezer's "Buddy Holly" and the graceful fly-wire dancing of Christopher Walken to Fatboy Slim's pulsing "Weapon of Choice." No doubt about it: Every one of these videos is an award-worthy testament to Jonze's ability to combine hard work with fun-loving spontaneity. Accompanied by an informative 52-page booklet, this two-sided DVD also explores Jonze's artistic evolution with an entertaining selection of video rarities and three half-hour documentaries, the best being a revealing and very funny interview with rapper Fatlip after his dismissal from the Pharcyde. Commentaries for the music videos are consistently worthwhile, supporting Jonze's own belief that his best videos were made for artists whose work he genuinely enjoyed. Lucky for us, his pleasure is infectious.
The Work of Director Chris Cunningham
Like the other volumes in the acclaimed Director's Series, The Work of Director Chris Cunningham offers a feast of visual ingenuity, with one major difference: Unlike the relatively playful brightness of Jonze and Gondry, Cunningham wants to involve you in his nightmares. From the urban monstrosities of Aphex Twin's "Come to Daddy" to the limb-shattering weirdness of Leftfield's "Afrika Shox," Cunningham's music videos emphasize the freakish and the bizarre, but they are also arrestingly beautiful and otherworldly, as in the aquatic effects used for Portishead's "Only You," combining underwater movements with ominous urban landscapes. Some of Cunningham's shock effects are horrifically effective (his 'flex" video installation, excerpted here with music by Aphex Twin, is as disturbing as anything conjured by David Cronenberg), while others are cathartic or, in the case of Aphex Twin's "Windowlicker," outrageously amusing. And while the eerie elegance of Madonna's "Frozen" arose from a chaotic production, the signature work in this collection is clearly Bjk's "All Is Full of Love," a masterfully simple yet breathtaking vision of intimacy involving advanced robotics and seamless CGI composites. In these and other videos, Cunningham advances a unique aesthetic, infusing each video and commercial he makes with a dark, occasionally gothic sensibility. That these frequently nightmarish visions are also infectiously hypnotic is a tribute to Cunningham's striking originality.

The Work of Director Michel Gondry
The Work of Director Michel Gondry invites the lucky viewer into a wonderland of childlike imagination. Before the Versailles-born Gondry turned his creative ingenuity to feature films (beginning with the underrated Human Nature and the 2004 Jim Carrey comedy Eternal Sunshine of the Spotless Mind), these 27 music videos and assorted "stories and things" formed a legacy of supreme cleverness, suggesting a creative lineage from the pioneering film magic of Georges Mi to the groundbreaking experimental films of Norman McLaren. It's perfectly fitting that the accompanying 75-minute documentary is titled "I've Been 12 Forever," because Gondry (b. 1964) never lost the sense of wonder and inventiveness that children display when their minds are allowed to flourish in a creative environment. No wonder he's best known for his dazzling collaborations with Icelandic pop star Bjk, resulting in music videos (seven included here) that redefined the magical potential of the medium. Each, in its own way, is a masterpiece of the fantastic. What's also remarkable about Gondry's work is its technical progression, from the homemade crudeness of his earliest videos for the French band Oui Oui, to the technical wizardry of Kylie Minogue's "Come Into My World," in which the Australian pop star is seamlessly multiplied as she strolls around a busy Parisian intersection; like many of Gondry's videos, it's a stunning "how-did-they-do-that?" work of art, reminiscent of Zbigniew Rybcynski's prize-winning 1982 short "Tango." From the hilarious dreamworld of the Foo Fighters' most popular video "Everlong" to the painstaking pixilation of Gondry's videos for the White Stripes (one made entirely of animated Lego blocks), this DVD is packed with Gondry's tireless pursuit of perfection; he'll do whatever's necessary, no matter how simple or complex, to achieve perfect harmony between song, artist, and visual concept. All the while, he's drawing from a seemingly endless well of inspiration, as evident in the delightful 52-page booklet of stories, drawings, photos, and interviews that chronicle the eternal sunshine of a brilliant mind. --Jeff Shannon このレビューは、絶版または入手不可の同タイトルのレビューから転載されています。

DVD features
Handsomely packaged and brimming with extra goodies, Palm Pictures' Director's Label Series Boxed Set will no doubt be required viewing for future generations of independent film and music video makers. The extras in the set include a poster featuring images from Chris Cunningham's videos on one side, and a collaborative drawing (also known as an "exquisite corpse") by the three directors on the other. The extra disc provides new videos by Jonze and Gondry, which may come as a disappointment to... 続きを読む